LETS SOMETHING LEARN ABOUT LOCUST

Castes
The following are the main species of migratory locusts:

1. Locust of the Rocky Mountains of North America

5. Italian and Morocco locust. Most of them are found in Africa, East Indies,

Locust control
Once locusts begin to cause nuisance, it becomes difficult to control.

To control this, spraying toxic oils from airplanes,

poisonous feed such as dispersion of soaked wheat bran in benzene hexachloride solution, etc. is useful.

Destruction of eggs and the use of hopperdozers in wheels on the wheels,

toppling the locusts into water and kerosene-laden streams are other measures,

but these measures are expendable. Therefore, they can be organized at the international level only.

their residence
Their habitats are formed in places where the climate is unbalanced and habitats are limited.

Staying in these places helps in spreading the limited number of favorable seasons in the enclosed areas.

There are four types of migratory locust outbreak sites:

1. Delta surrounded by sand of the rivers falling in the Caspian Sea, Arel Sea and Balkash Lake

2. Grasslands enclosed by deserts, where there is a great unevenness in precipitation,

due to which the habitat of locusts changes;

3. Dry and hot clay islands of Central Russia, which are moist and extremely cold for grasshoppers.

humid and tropical forests of the Philippine. 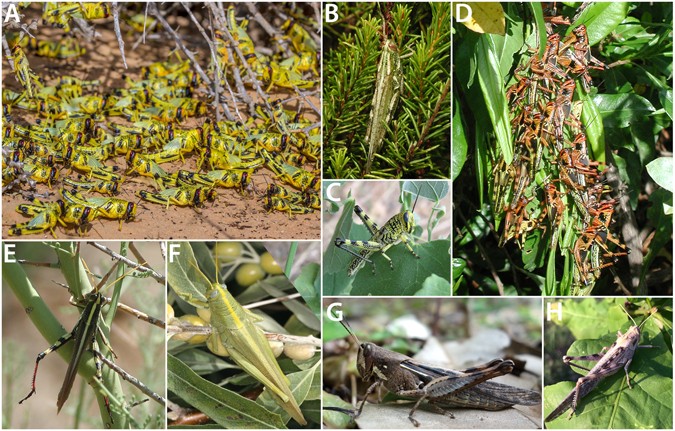 Muscles are activated due to flying, which increases their body temperature.

Their flights are closed during rain and winter.

and migrate to Iran and Arab countries during the fall. They then spread to Soviet Asia, Syria, Egypt, and Israel.

Some of them return to India and Africa, where breeding occurs during the second monsoon year.

This locust, called Locusta Migratoria, destroys crops and vegetation in countries in Asia and Africa.

Locust is an insect of the Orthoptera family of the Acridiide family.

Hemiptera is also known as grasshopper or harvest locust of the Cicada clan of Ganes.

It is also known as the Short Horned Grasshopper.

Only six species of it are found in the whole world.

It is a migratory insect and its flight has been found up to two thousand miles.

The female locust lays 20 to 100 eggs in each vault, forming cells in the soil. 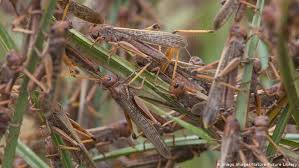 In a hot climate, eggs hatch in 10 to 20 days, but in northern latitudes the eggs remain dormant throughout the winter.

Baby grasshoppers do not have feathers and in other things they are similar to adult grasshoppers.

Baby grasshopper food is vegetative and becomes adult in five to six weeks.

Its skin changes from four to six times in this period.

Adult locusts reach adulthood within 10 to 30 days and then lay eggs.

In some castes, this work takes place over several months.

Of the three pairs of locust segmented legs, the posterior joint is the most enlarged.

These two legs are the longest and the strongest. Rigid, narrower wings are wider wings beneath the compartments.

At each stage, they differ from each other in color, shape, physiology and behavior.

The color and pattern of the monkey’s nymph varies. It can adjust its color to suit its environment.

Its metabolism and rate of taking oxygen are low.

The color of the nymphs of the young man is black, yellow and the pattern is fixed.

Its metabolism and oxygen taking rate are high. It is nervous, active and sensitive.

Its heat is also high, because its dark color absorbs more radiation.

The shoulder of the young man is wide, the wings are long and the shape of the genus pronotum.

Their basic tendency to live in youth is very strong.

The group remains condensed even when the death rate is high.

Their youth get dissolved due to the storm.

The offspring of monogamous grasshoppers transform into a gregarious variety when grown in the herd.

If youth is more numerous and long-lived, the children of monogamous

grasshoppers growing in it are extreme gregarious and migratory.

The offspring of a gregarious locust grows in solitude and transforms into monogamy.

The monogamous state is the natural state of this caste.

A monogamous state exists in the area where this caste is found.